So, this is a game I created during Splash Jam 2017. It was just around the time the #MeToo movement, originally founded by Tarana Burke, had gained massive popularity with the Weinstein case. In the following weeks, I saw many friends, colleagues, and men in general react with suprise and outrage at the dire state of things. Just as I had seen them suprised and outraged during #WhenIWas in 2016 or #YesAllWomen in 2014.

Now, I'm not trying to act like I'm particularly enlightened or anything, there are probably many more awareness campaigns that I was blissfully unaware of and that have been around for much longer than I have paid attention (Me Too itself has been around since 2006). But seeing the flabberghasted reactions in my circles did make me wonder, how, in the year of our Lord 2017, are we still surprised by this? And how are we surprised again, and again, and again?

So with Splash Jam's theme being Cycles and me having a penchant for ruining everybody's fun, I created this game on a topic that I had nowhere near enough time to do justice, or have any business discussing in the first place. You know, as I'm wont to do.

It is in essence a rumination on performative allyship, doing just enough to make ourselves feel secure in the knowledge that we're the good guys, saying "This isn't right!" and considering the problem solved so we can act surprised all over again when the next avalanche of stories comes out.

In the end, I wasn't sure if the idea actually worked or if I could really add anything meaningful to the discourse by pursuing it further. Plus, #MeToo seems to have hit home enough that hopefully no one will ever be surprised again. 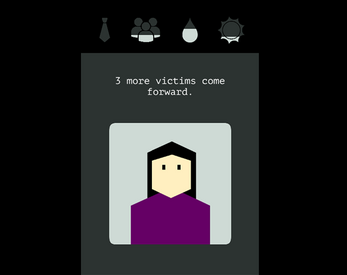